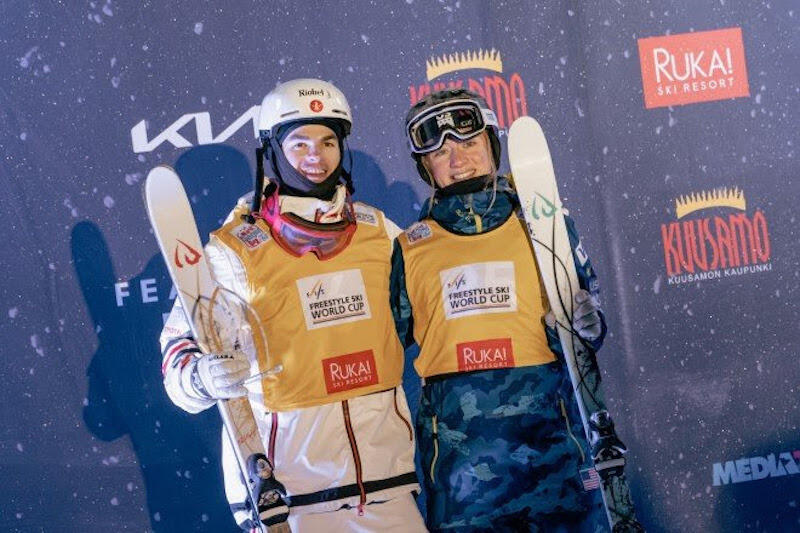 In the women’s competition Olivia Giaccio was on fire all day long, first coming with a super solid run to clinch the top spot in qualifications, and then improving each of her runs in the finals and finishing the competition in first place with 78.51 points for her third and final attempt.

Giaccio, who missed most of the previous two World Cup campaigns while recovering from an ACL injury, looked stronger than never before, especially impressing with her jumps as well as technique on the bumps.

With only one top-3 World Cup finish before competition in Ruka, Giaccio’s victory on Saturday was unexpected, but definitely well deserved.

The 21-year-old skier looked very confident throughout the entire day and we can’t wait to see her performing some 1080s on the jumps once the season progress.

Things were equally exciting over in men’s competition, where Mikael Kingsbury came back on top of the podium in Ruka, after the Canadian skier missed the competition on “Battery Run” last season due to his lower back injury.

After qualifying in top spot, Kingsbury played it rather safe in the first round of finals with Horishima, Kolmakov and Salonen showing that all of them would be in the mix to battle for victory once it’s down to best six riders.

But then once again, Kingsbury showed his experience and delivered the best run of the day to snag his 9th victory on the venue in Ruka.

Pavel Kolmakov also managed to step things up in the super final as he scored his career’s second World Cup podium, which came four years after he snagged his first top-3 finish, also on the course in Ruka. Ikuma Horishima completed the men’s podium in third place.

The moguls World Cup action now moves to Sweden, where a pair of competitions is scheduled to take place next weekend, December 11-12.