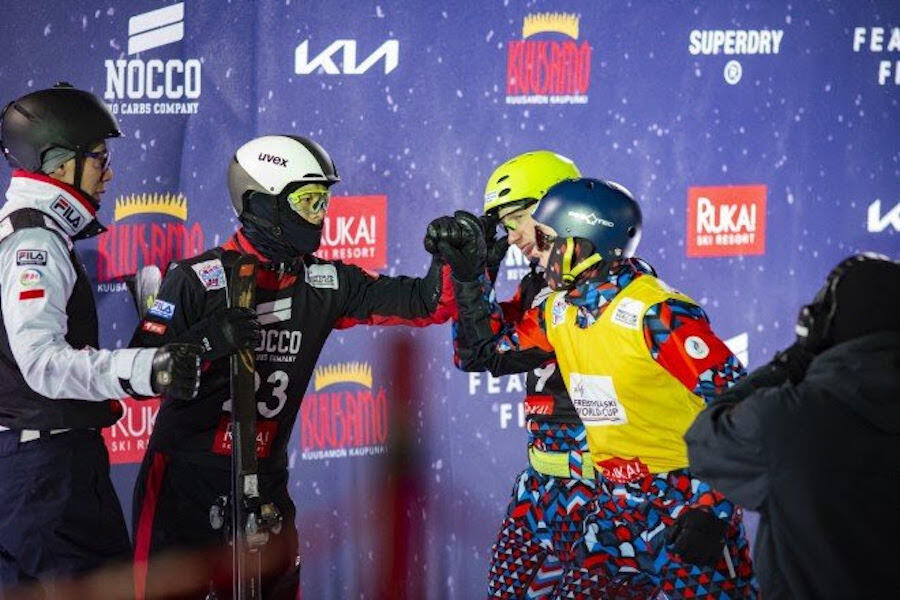 Novosad led the field confidently in the finals, first landing a solid Full-Full for a score of 88.51 points in the first round, just to back it up with a textbook double Full-Full that earned her 98.70 points and a place on top of the podium in the super final.

I’m already looking forward to next stop in Canada as well as the Winter Olympic Games in Beijing. My preparations are on the right track and I hope I will be able to push my limits even further in China.”

Second place on the day went to Xu Mengtao, who was trying to defend her top spot from last week’s second competition in Ruka and decided to go for a triple flip, once it was all down to top-6 athletes.

Xu, however, couldn’t quite land her Lay-Full-Full properly and with a score of 91.83 points, she finished the competition in a runner-up position.

34-year-old veteran Olga Polyuk (UKR) rounded out the women’s podium in third place with 79.75 points for her Lay-Full, earning her very first World Cup top-3 finish more than 14 years after her World Cup debut in Apex (CAN) back in 2007.

In the World Cup standing it is now Xu, who is leading the field with 220 points following her good performance on Friday. Her teammate Kong Fanyu dropped down to second place with 192 points after three competitions, while Novosad is following in third place with 186 points.

His only and somehow disappointing result came at 2021 World Cup finals in Almaty, where he finished in 10th place after failing to land his jump in the finals. That wasn’t the case on Friday, as Burov led the men’s field from start to finish with three almost perfect jumps.

First, he earned 129.65 points in qualifications, then 130.98 points in the first round of finals, just to put an exclamation point in the super final, where he landed a superb Full-Full double Full for which he received 133.48 points and thus an indisputable spot on top of the podium.

In the men’s World Cup ranking Burov leads the way with a perfect score of 300 points after three events, with Jia following up in second place with 170 points and Noe Roth (SUI) completing top-3 with 127 points.