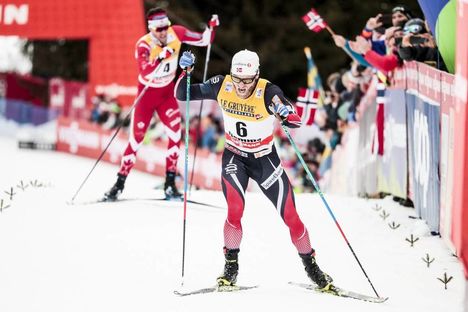 • Martin Johnsrud Sundby and Lukáš Bauer are the only other athletes with multiple victories (2 each). Petter Northug, Alexander Legkov, Sergey Ustiugov and Tobias Angerer all won on one occasion.

• Eight of the 12 winners of the Tour de Ski went on to win the overall World Cup that.

• Cologna has claimed a total of seven overall podium finishes in the Tour de Ski, more than any other athlete. Petter Northug (6) and Martin Johnsrud Sundby (4) follow in second and third place all-time.

• In total, Norwegian athletes have claimed 13 podium finishes in the men's Tour de Ski, at least six more than any other country. Switzerland (7) and Russia (6) follow.

• In total, only Petter Northug (13) has won more stages in the Tour de Ski than Sundby and Dario Cologna (both 7).

• Norway and Russia are the only countries to have recorded at least one top-three stage finish in all previous 12 editions of the Tour de Ski.

• Bolshunov is leading the men's overall World Cup standings coming into the Tour de Ski. Both Bolshunov (will be 22 on 31 December) and Klæbo (22) could become the youngest winner of the men's Tour de Ski. Dario Cologna was 22 years and 299 days when he won in 2009.

• Jean Marc Gaillard is one of two athletes to have appeared in all previous 12 editions of the Tour de Ski, alongside Devon Kershaw