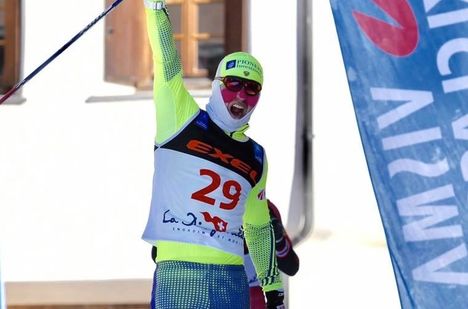 The Swiss Engadin valley showed off its best side during todays´ La Diagonela with clear blue skies, no wind and perfect track conditions.

The course of 50km had a mostly flat profile with some challenging sections, in particular the last 1.5km climb to the finish line.

In the men's race a big field came into the last climb with Ilya Chernousov from Team Pioneer Investments and Tord Asle Gjerdalen, Team Santander in the front.

Gjerdalen made a push in the uphill, quickly responded by Chernousov.

The last steep pitch up to the finish line no one could hang on to Chernousov who took the first male Russian victory in Visma Ski Classics.

Gjerdalen took the 2nd place and Øystein Petterssen was for the first time of this season up on the podium taking 3rd place.

"I'm very happy to take my first victory in Visma Ski Classics after being second at Sgambeda earlier this winter. This also feels like home as I've been living in the Engading Valley for four years" Chernousov said when interviewed.

Being 2nd in La Diagonela got Gjerdalen back in the lead of the Hertz Champion bib competition previously held by his team mate Andreas Nygaard.

Instead Nygaard increased his lead in the sprint competition, same as Stian Hoelgaard from Team Lease Plan in the youth competition.

The womens´ race broke up pretty early with Katerina Smutna from Team Santander making a big push half way through as the ladies was passed by the mens´ field.

After previous two 2nd places in a row in La Diagonela, Smutna could today step up on the top of the podium as the winner.

"Fantastic to finally win La Diagonela! It was very cold in morning but I had great skis all the way. Now I'm looking forward to Marcialonga next weekend!" Says Katerina Smutna.

In the women's Hertz Champion competition, Britta Johansson Norgren is still in the lead with Katerina Smutna closing in.

Sara Lindborg, Team Serneke moved up to third place after being in the podium as 3rd finisher two events in a row.

In the sprint competition, Johansson Norgren increases her lead after being first at both sprints today.

Next weekend, Visma Ski Classics moves on to Italy and the historical Marcialonga!