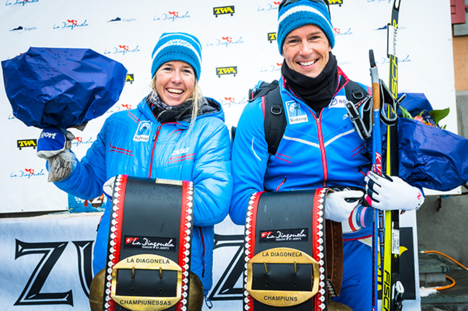 In the women’s race, Astrid Øyre Slind, broke away already after 20 km. She did a great race on her own from there and reached the finish line impressing 3.30 minutes ahead of her teammate Kari Vikhagen Gjeitnes.

Katerina Smutna, Ed System Bauer Team, fell and broke a pole during the race but she still managed to get the third podium place, almost seven minutes behind Øyre Slind.

Britta Johansson Norgren, Lager 157 Ski Team, had a hard day but made a good ending of the race finishing fourth, 25 seconds behind Smutna. “I know there was going to be a slow race until the first sprint. I wanted to have a good position into the hill because we didn't know when the men will catch up with us.

Then I just turned up the speed a little bit and got at a gap and had to go for it“. Said Øyre Slind in the finish interview.

In the men’s race things started to happen when Petter Eliassen, Team Ragde Eiendom, increased the tempo at the uphills after about 20 km, today with kick wax under his skis.

In the downhill towards St. Moritz, an accident that affected both the men's and women's race happened.

Max Novak from Team Ramudden touched Katerina Smutnas skis from behind and except Katerina, both Novak and Morten Eide Pedersen, Team Kaffebryggeriet, fell. After this incident, Petter Eliassen and Chris Andre Jespersen got a gap and worked hard together to get away from the group.

Then Jespersen increased the speed even more and started to break away from Eliassen. Jespersen was strong all the way to the finish in Zuoz and the winning margin was 2.47 minutes. “That was a long and hard race. When I dropped Petter off I just went for it, I didn't think I was gonna make it but I am happy that I did. It feels amazing finally winning" said Jespersen after the race. Eliassen chased Jespersen for a long time before he were caught up by the second chasing group and in the fight for second and third places Tord Asle Gjerdalen, Team Ragde Eiendom and Alexey Shemiakin, Russian Winter Team, were the strongest.

Due to the offensive skiing by Eliassen throughout the race, he was awarded with the Visma Skier of the day.

... Astrid Øyre Slind and Stian Hoelgaard- who ended fourth today, are the new leaders in the Hertz Champion bib competition.

Øyre Slind with her total champion points of 775 is only 5 points ahead of Johansson Norgren. Hoelgaard is in the lead with 585 points and Emil Persson is second with 559- despite that he missed the race today due to sickness.

Hoelgaard and Slind are also now the leaders of the Visma Alp Trophy competition. Stian Berg, Team Kaffebryggeriet and Britta Johansson Norgren are both keeping the lead in the Sprint competition.

Lager 157 Ski Team is now only 10 points ahead of Team Koteng in the Pro Team competition.